Updates and information from August 2017!

In the last week of August, Martin spotted this busy Hummingbird Moth visiting his "Miss Ruby" plant - otherwise known as a Butterfly Bush.

Trying Something New - Our Cuddle Pen

Please visit our blog about this here to learn more about our new Cuddle Pen we tried in August.

Remember the black turtle beans we planted this year?   (Here is a link to the June blog where they were mentioned.)

Throughout the growing season, Martin will dig up plants in the fields to see what is happening with their roots.

In the picture below is a black turtle bean plant and roots. Some of the things you will notice is that the bean plant is flowering and forming pods where 3-4 beans will grow.

On the roots you can see little clusters called nodules. 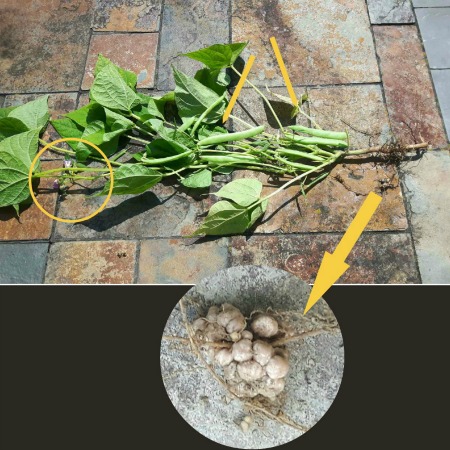 Each nodule is full of rhizobial bacteria.

These bacteria take nitrogen out of the air in the soil and make it into nitrogen that the plant can absorb. This is one reason why loose soil with air pockets is important for plant growth.

In return for providing nitrogen the plant provides the nodules with energy for the bacteria to grow.

If you cut the nodules they are pink on the inside. At the end of the season they will be 3-4 times as big as they are now.

Interestingly enough, there are many different kinds of bacteria, and only specific strains are desired by certain plants.

If beans have not been grown in the field for a few years, the bacteria strains for beans would have diminished.  If it has been more than 3 years, then they are likely unavailable.

To resolve this, sometimes seeds are inoculated with a dry form of the bacteria they need to help re-invigorate the soil with that bacteria.

Nodules like these are common on legume plants – alfalfa, red clover, beans, peas.

Corn, in comparison, is not a legume so it is unable to supply it's own nitrogen and therefore needs a large amount of nitrogen in the soil.

Conventional farmers tend to apply nitrogen to their corn crops to support their growth. For organic farmers, they use legumes to build nitrogen content in the soil, then plant corn after.

One of our older hayfields is being transitioned to new crops.

The hay field in the photo already provided 2 cuts of hay this year.  Compost was applied to it and then it was ploughed down last week.  (about August 10th)

The ploughed down sod will decompose and supply lots of nitrogen for a crop of corn to be planted here in the Spring.

In the meantime, it has been planted in oats.  The oats will be harvested at the end of September as oatlage.

Some of the oats will re-grow on the field.  This re-growth and the oat stuble will protect the soil against erosion during the winter months.

Here you can see the spelt being harvested.  (August 9th)

Below - the spelt almost ready to be harvested.  After being harvested it will be used as feed for the cows.  (More info on cow nutrition available here.)

The straw is used for bedding and returns to the fields as compost.

Spelt is easy to grow, creates lots of straw, is usually profitable, has no disease problems and underseeds well with red clover.

The red clover becomes a green manure crop which will be plowed under later.  It is called a green manure because it provides nutrients to the soil for future crops.

(Start reading here or jump back to the July blog first to get a couple of updates before this.)

After the hay was cut on Friday July 28th it was spread out on the field to dry on the following day.  You can see this in the left of the following picture.

We used a wheel hay rake on Tuesday August 1st to gather the hay into rows for baling.

After being in rows, then the hay can be baled into large rectangular bales.

Dry hay is hard to make because it takes longer to dry.  We were planning on baling it a day earlier but it was not dry enough, over 20% moisture.

The bales were then gathered and loaded carefully onto a trailer to be transported and stored closer to the Main Barn.

One of the challenges with this second cut of hay was moisture.  All of our silos were filled with haylage but we still had 'wet' hay we needed to store.  Because it was already in rows, it's not feasible to let it dry further to become dry hay.

So since the silos were filled this 'wet' hay - instead of being chopped up and stored in the silo as haylage, was baled and wrapped to become baleage.

Overall from this second cut of hay we harvest 3 types of hay.

Haylage - Chopped smaller so it can be blown into the silo and pulled out of the silo more easily.  Once sealed in a silo it is fine for years, easily 2-3 years - although our cows always end up eating it before that time.

Baleage - Is hay with a high moisture content like haylage, but is kept long stemmed, baled and wrapped in plastic.  It can be stored for about 9 months.

Hay - These bales will store for about one year.

During the summer, the cows do have access to pasture, but still eat a fair amount of hay / haylage / baleage.  Throughout the warmer months we will harvest 3 cuts of hay and almost all of that will be eaten by the following year when the process starts again.