In March 2015, the installation of 1,254 solar panels was completed at our farm to counter balance our use of electricity.

Recently we asked her to answer a few questions about the project.

Jill, you spent a lot of time at Mapleton's during the installation - what were a few of your favourite things about Mapleton's?

The people are great! (So is the ice cream and the food!)

How do solar panels work?

Sunlight hits the panels, freeing electrons to flow to the conductors on the cell. The cells connect together in panels. The panels, combiners and inverters are connected together to create a system that can be connected to the grid.

What do you like in general about seeing solar projects installed?

It's great to see distributed generation close to loads as this reduces losses during transmission and distribution. In this case the panels are only 900 meters away from the electrical grid. Also, roof top solar, as we installed at Mapleton's, generates electricity without consuming more land.

Were there any unique challenges involved in the Mapleton's project?

All of the buildings had metal roofs making installation difficult if it wasn't dry because the metal would get slippery.

Another challenge was snow. Because the installation took place during the winter we needed to take time to clear snow off on several occasions.

These factors meant that it took longer to complete installation.

What are some interesting facts related to the solar panels?

• In total we installed 1254 panels, with each one being 0.982m x 1.954m in size.
• Each panel contains 72 polycrystalline silicone cells.
• The panels are not light – each one weighs 23kg and had to be lifted to roof height on skids using a tele handler (zoom boom).

What were some of the main steps required to get the solar panels in place?

• A system of rails secures the panels in place. This requires the roof to be measured and marked off for where the rails will be attached.
• Once the rails are attached to the roof, ground bonding wiring is attached to the rails.
• DC (direct current) wire is then installed to connect the panels to combiner boxes.
• The solar panels are then put in place on the rails using specialized clamps and connected together in strings. 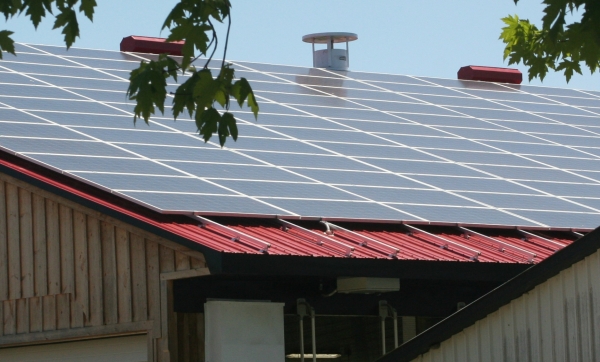 How was the electrical hook up done?

Sometimes we need to make slight adjustments to the set up, but this is the general scenario. 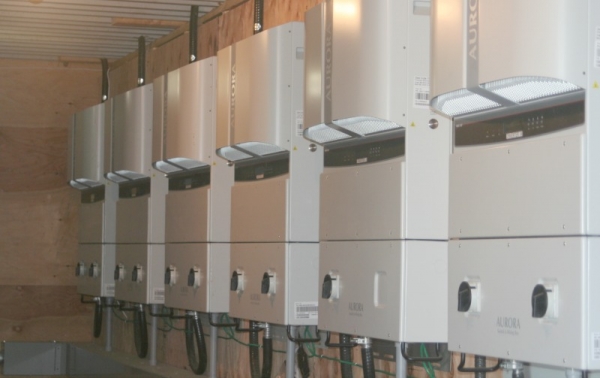 An inverter is a piece of electrical equipment that converts direct current (DC) electricity into alternation current (AC) electricity. At Mapleton's there are 29 inverters. Twenty of them are 12kW inverters, nine are 10kW inverters.  (The photo to the right shows some of the inverters.)

In all of the above steps we refer to the power as direct current (DC) power.

After these stages, as the power flows out of the inverters, it is then referred to as alternation current (AC) power.

The inverter outputs are combined together in two stages. First at electrical panels and then at a splitter. 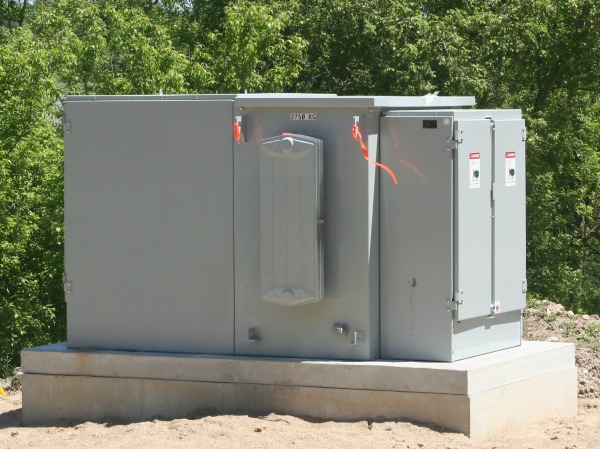 The combined AC power then goes through two disconnects and a meter to measure how much power is being produced.

Next, after going through the disconnects, the energy flows to a transformer (photo at right) which steps the voltage up from 600V to 44kV.

After going through a switch, the energy flows into the electrical grid approximately 900m away.

How are the panels connected between the different buildings?

The panels are not connected between different buildings. Panels from each building power separate inverters. The combined output of panels run mainly through the roof of the barn to the electrical room where inverters are located. There are also some inverters on the hay barn and the drive shed.

How will weather and seasonal variances effect energy collection from the panels?

The system will generate more in the summer than the winter because the days are longer and therefore there is more solar insolation. However, the panels function better in the winter with cold temperature.

What is the life expectancy of the panels?

20 years... although the solar panels will produce beyond that time frame at a reduced power output.

To read more about the solar energy project at Mapleton' s also visit this link...